When complete, the 1.1-acre coastal park at the city’s emerging new £135m Copr Bay phase one district will feature a selection of new trees, including cherries and pines.

They’re among over 70 new trees being introduced as part of the district. New trees will also feature on the ramp leading to the new bridge over Oystermouth Road, along with six new elm trees on the central reserve close to Oystermouth Road’s junction with West Way.

Water features and bug hotels will also be included at the coastal park, which has been designed in a dune-like shape to celebrate its closeness to Swansea beach.

The coastal park is being constructed above a new car parking complex. A ‘living wall’ will run alongside the Oystermouth Road side of the new car park, with vines soon being planted there.

The roadside running alongside the new car park will also benefit from the introduction of new greenery, including the planting of many new trees.

Copr Bay phase one is being developed by Swansea Council and advised by development managers RivingtonHark. It also includes the 3,500-capacity Swansea Arena to be operated by Ambassador Theatre Group, new space for leisure and hospitality businesses, new homes and the new bridge over Oystermouth Road.

Construction – led by Buckingham Group Contracting Ltd – will be complete later this year, with the arena opening its doors in early 2022. 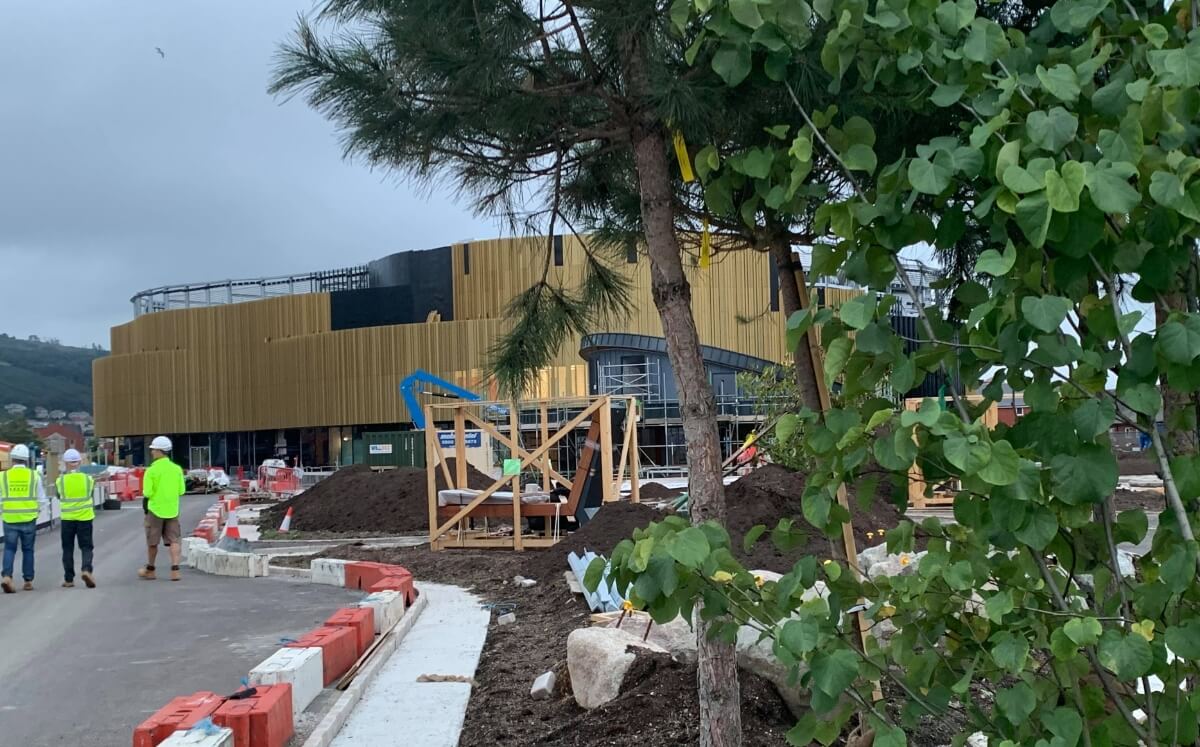 This kind of greenery not only generates a better city centre visiting experience, but it also adds more biodiversity to the city centre as we look to become a net zero city by 2050.

Cllr Rob Stewart, Swansea Council Leader, said: “The introduction of the coastal park, living wall and more trees along Oystermouth Road and other areas builds on a huge amount of greenery the council has already introduced in the city centre. This includes the transformation of The Kingsway into a greener, more pleasant environment for businesses and residents.

“This kind of greenery not only generates a better city centre visiting experience, but it also adds more biodiversity to the city centre as we look to become a net zero city by 2050.

“Many more green schemes are also planned for the city centre. These include the re-greening of Castle Square, the introduction of a ‘living roof’ at the new office development at 71/72 The Kingsway, the ‘living building’ being led by Hacer Developments on The Kingsway, and a number of ‘living walls’ on The Kingsway being installed by partner organisations.

“We’ll also soon be introducing a temporary pop-up park at the former St David’s Shopping Centre site as part of a temporary scheme to develop more vibrancy there, pending its regeneration in the longer-term.”

Other features of the new coastal park include free WiFi, along with solar-powered benches enabling people to charge their smartphones, tablets and laptops. A new café and restaurant is being constructed there too, which will be run by The Secret Hospitality Group.