Two UK Government Ministers have seen first-hand the significant progress being made on the emerging £135m Copr Bay phase one district in Swansea.

The project – worth £17.1 million a year to Swansea’s economy – is being led by Swansea Council and advised by development manager RivingtonHark.

Earmarked for completion in the autumn of 2021, its construction is being led by Buckingham Group Contracting Limited.

The council is financing Copr Bay phase one, with some funding for the arena coming from the Swansea Bay City Deal. The Copr Bay bridge forming part of the scheme is part-funded by the Welsh Government’s Active Travel fund.

A second phase of the Copr Bay development is also planned, which will include a new public sector hub. This phase will be worth £106 million a year to Swansea’s economy. 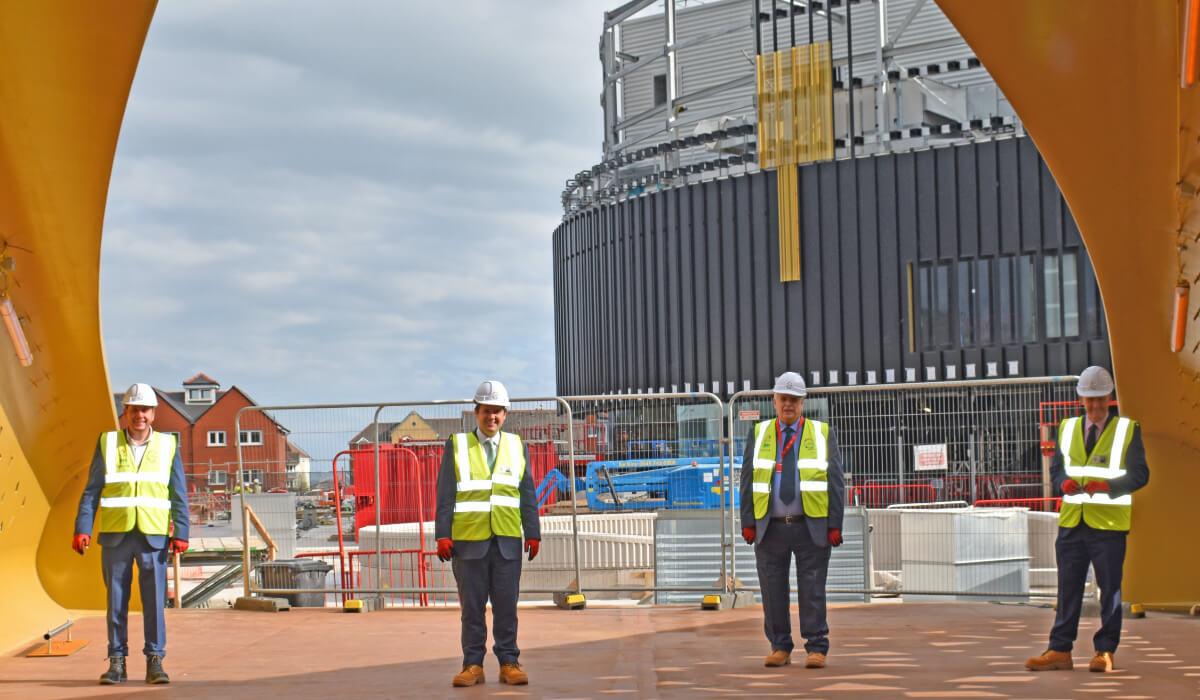 Cllr Rob Stewart, Swansea Council Leader, said: “Progress on Copr Bay phase one’s construction throughout the pandemic has been considerable, so it was a pleasure to show both Secretaries of State around the development as we near its completion in the autumn.

“This phase of work, however, is a catalyst for even further investment as part of phase two, which is worth six times as much and will either create or secure thousands of well-paid jobs in Swansea, helping assist with our city’s economic recovery from Covid-19.

“Although phase two won’t be a City Deal project, we look forward to continuing to work closely with the UK Government and Welsh Government to attract support from the levelling-up and shared prosperity funds.”

Communities Secretary Robert Jenrick MP said: “I was deeply impressed with the innovative projects I was able to see first-hand on my tour around Copr Bay, made possible through the Swansea Bay City Region Deal.

“The state-of-the-art arena and surrounding area will become a destination for leading events as well as students and visitors to the area, unleashing Swansea’s creative and economic potential.

“This Government is levelling up every part of the United Kingdom and, backed by £115 million of government funding, Copr Bay is helping make Swansea an even better place to visit, live and work in.”

Simon Hart, Secretary of State for Wales, said: “As we build back better and stronger from the pandemic, projects like the regeneration of this part of Swansea show how we are bringing jobs, growth and innovation to our communities.

“Delivering transformational projects across Wales is a top priority for the UK Government and is why we have backed growth deals covering every part of the country.

“I look forward to the continued progress of this project as it helps unleash the potential of Swansea and the wider City Deal region.”

A developer to lead Copr Bay phase two is due to be appointed later this year as part of the council’s Shaping Swansea initiative.